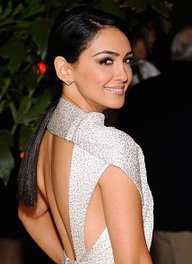 Nazanin Boniadi is rapidly making her mark in both film and television. She co-starred as CIA analyst Fara Sherazi on seasons three and four of the Emmy and Golden Globe award-winning drama "Homeland," for which she shared a 2015 SAG Award nomination in the Outstanding Performance by an Ensemble in a Drama Series category. Boniadi will next appear...